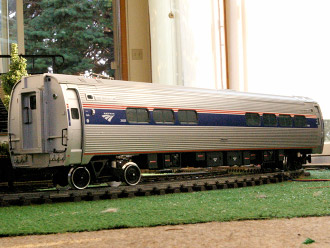 Our LGB Amtrak Amfleet Cafe Car arrived at the railroad in June, 2008, along with an LGB Amtrak Genesis locomotive and two LGB Amfleet Coaches. The Cafe Car is over two-and-a-half feet long and is our longest piece of rolling stock. It rides on two four-wheel trucks and is painted in Amtrak's current Phase IVb livery, though LGB calls it Phase V. The Cafe Car wears number 20035. The highly detailed exterior features opening side doors, drop-down steps, and an elaborate undercarriage. All eight wheels are metal and power the switchable interior lighting. The windows are much less opaque than those of the Amfleet Coaches and an interior with tables and seats can easily be seen. The vestibules are detailed but their doors don't open. The vestibules' interior lights also illuminate some clear plastic to simulate exterior lamps on the car ends.

The Amfleets, like the Genesis, came equipped with knuckle couplers instead of the hook-and-loop couplers found on most LGB products and on most of our rolling stock. The Amfleets and the engine included hook-and-looks replacements, though we haven't swapped them out. So far, the Amfleets have run very well. They effortlessly navigate our small R1 four-foot-diameter curves, though we have had to make some adjustments to our layout to prevent the long cars from hitting anything on curves. The Amfleets certainly look better on larger curves, and our new layout will make extensive use of R3 eight-foot-diamter curve track. 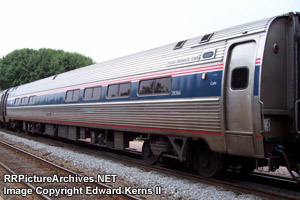 Between 1975 and 1978, Budd Company built 86 Amfleet I cafe cars. There are Amfleet II Cafe Cars that were built between 1981 and 1983, though those only have a vestibule on one end. There are many variations of Amfleet Cafe Cars, including the version modeled by LGB with six tables at one end, a snack bar in the middle, followed by another eight tables. The Cafe Cars were designed to operate at speeds up to 125 miles per hour and each is equipped with a restroom. The car's heating and air conditioning are powered by the locomotive. The Amfleet coach is 85 feet long, 12 feet 8 inches tall, 10 feet 6 inches wide, and weighs about 110,000 pounds. Amfleet rolling stock can be found in the northeast, south, and midwest United States.

Genesis
From The Archive

Random entries from our Rolling Stock and Building Libraries.